Greeks are Orthodox Christians. Our religion has two sources. The Holy Bible (old & new testaments) and Holy tradition (the writings and acts of the Apostles, Saints, Martyrs and of the fathers of the Church). 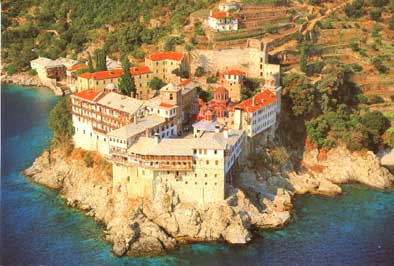 Mount Athos, the biggest and most important group of manasteries in Greece, is situated in Chalkidiki peninsula, in the north-east of Greece.It is the centre of Eastern Christian Orthodox Monasticism and a treasury which houses and guards many artifacts and monuments of religious, national and artistic value.
http://www.ouranoupoli.com/athos/athos.html 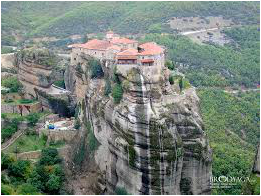 Meteora (the biggest and most important group of monasteries in Greece after those in Mount Athos, see above). The first hermits went to live here in the 11th century. The rock monasteries have been characterized by Unesco as a unique phenomenon of cultural heritage.
http://odysseus.culture.gr/h/3/eh352.jsp?obj_id=2442 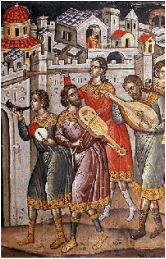 Byzantine music is the music of the Medieval Roman Empire.  Greek and foreign historians agree that the ecclesiastical tones and in general the whole system of Byzantine music is closely related to the ancient Greek system. Its composing system is the same as the one the Greek traditional songs are composed, a system that remains alive till today because it covers music intervals smaller than the semitone.